I left the hostel yesterday just before sunrise, and headed up towards the city once again. The National Gallery and adjoining National Portrait Gallery came highly recommended in my handy-dandy guidebook as well as online, so I planned to spend as much time as was opportune perusing the collections within. I grabbed myself a hire bike from one of the many stations around (still hanging on the fee I paid for the previous day, because it lasts 24 hours instead of a calendar day) and rode myself up Knightsbridge and Piccadilly, past Hyde Park. Naturally, I confused Hyde Park Corner with Piccadilly Circus and ended up stopping about 4km too early. This was annoying but okay, because it meant that I could take a nice lengthy walk along Piccadilly, which is a rather nice street. Crossing the road via the pedestrian tunnels, I wound up in what I suppose was an enormous traffic island, home to some very large war memorials. While they were temporarily diverting, it wasn’t anything massively special until I realised that what I had taken to be a decoratively-shaped wall was in fact another memorial, this time one about Australian soldiers, which literally listed every single town Australian soldiers came from in World War One and Two, including – the first thing I saw, about a centimetre high on a wall-sized monument – the small town of Bulahdelah in northern New South Wales near which my grandpa now lives. This was pretty amazing to just stumble across, so I naturally assumed that the memorial was wired with mind-reading powers, but it seemed to be malfunctioning as I couldn’t find any other name I was familiar with, try as I might.

Leaving the traffic island behind, I strolled up Piccadilly, enjoying the hefty buildings and parkland that caught my eye along the way. It was still very early – the gallery wasn’t due to open for at the very least another hour – and I soon realised that I was making rather too much progress. In order to mitigate this, I took a little sojourn into Mayfair (a suburb, not a street, as I found out after wandering around for some time). Strangely enough, the outside appearance of Mayfair, centred around Berkeley Square of ‘A Nightingale Sang’ fame, was not a whole lot fancier than any other part of central London that I had previously visited. I suppose it was a bit cleaner but the buildings looked pretty much the same (though on reflection, when I think of central London I’m at this point mostly picturing Pall Mall, where basic apartments fetch in the tens of millions, so perhaps it’s not a fair comparison). The hints of wealth were a bit more subtle – the Bugatti showroom housing cars worth $3 million, the shop with 24-carat gold-plated iPhones and iPads. However, I was gratified to find a Sainsbury’s in Mayfair, proving that people who can afford to live there are not cyborgs and still enjoy discounts on their Starburst.

I took a wrong turning heading out of Mayfair and wound up heading towards St. James’s Palace, where I found the royal bootmakers’ shop and a very tiny street that ended in a miniscule square with a café/restaurant at the end and very tall buildings on all sides. I expected that they would make me pay through the nose for a pastry, so I didn’t stay for long – just enough to nearly knock over a delivery man who had to walk sideways to get the box he was carrying down the tiny street.

Fortuitously, this roundabout route actually turned out to the right way, taking me along Pall Mall and directly to the entrance of the National Gallery. It was still half an hour to opening, so I sought out a post office where I could send a package home. This done, I somehow wound up with a booklet from a travel company that do all their tours by train. I sat down to have a read of it in Trafalgar Square, and before I knew it, the gallery was opening and queues were beginning to form at the front entrance. I hastened over, and joined the growing throng.

Over the next three hours, I proceeded through a succession of rooms filled with paintings without any apparent order or logic, apart from a broad commitment to falling within a given time period. Despite the hit parade of famous artists whose work was displayed in the first section (Da Vinci, Van Eyck, Botticelli, Holbein the Younger, Verocchio, Titian, Tintoretto, and apparently Raphael and Michelangelo but I didn’t see them) I felt my interest slowly waning, going from enthusiastically reading every description in a room to meandering down the centre of a room looking left and right. It was impressive, of course, to see paintings I knew fairly well in the flesh – I particularly enjoyed Holbein’s The Ambassadors, with it’s illusion of a skull only visible from the extreme right, and Van Eyck’s Arnolfini Portrait, which pioneered the painting of everyday life as well as having a tiny reflection of the painter sneakily worked into the mirror at the back. Playing my usual game for gallery enjoyment (vis., to imagine the government had decided to award me one work of my choosing in recognition of my overall fineness as a person) I steered clear of the fancier and better-known works, as well as the vast number of ornately gilded altarpieces and looked instead to a four-part work called The Four Elements by Joachim Beuckelaer.

After a quick lunch outside in Trafalgar Square, I went back in to tackle the second half of the gallery, with paintings from 1700 onwards. I enjoyed this rather more, with most rooms yielding a number of enjoyable works, with another hit parade of painters (Cezanne, Rousseau, Van Gogh, Degas, Gauguin, Renoir, Toulouse-Lautrec, Picasso, Monet, Manet, Sisley, Stubbs, Gainsborough, Velasquez, and so on). This time, the more famous works actually very much appealed to me. I particularly liked looking at Cezanne’s landscapes in Provence, all the British paintings (especially Dr Ralph Schoenberg by Gainsborough, because it was the first painting around that looked like a real person) and several rooms from Dutch/Flemish painters and Rembrandt. But my absolute favourite was a corner from Georges Seurat and two Scandinavians who expanded his style. The three paintings are below. I would take those from the British government and I would hang them on my wall without hesitation. 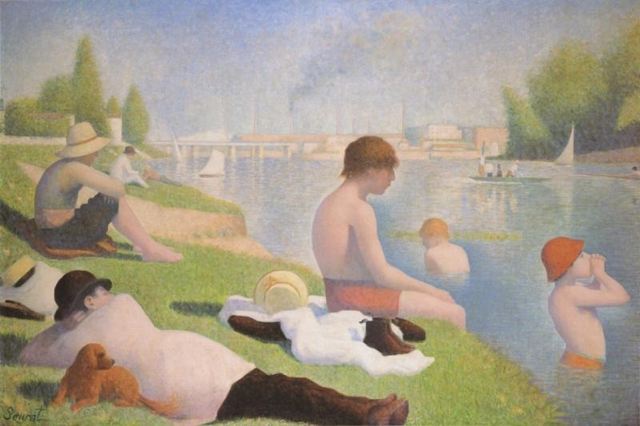 But it really was time to move on. I planned to take a lunch break but it was raining, so I bolted my sandwich and headed into the National Portrait Gallery. Let me tell you, it was wonderful. I started chronologically, with the earliest portraits – first a couple of 14th and 15th century statues, then a number official paintings of Tudor monarchs and dignitaries. While it was fun to see the originals of those representations I’d seen printed hundreds of times over, what was really good was the 60-second biographies of every person pictured, and the introductions at the beginning of every well-ordered room. I feel now as if I understand the progression of the British monarchy, through the different dynasties, the Civil War, Glorious Revolution and the Jacobite Rebellion feat. Bonnie Prince Charlie, in a way I hadn’t at all before. It quickly broadened from just the royals and courtiers to include notable leaders, and then writers and artists and sportspeople until there was one portrait of Queen Victoria in a room full of cricketers, politicians, scientists, inventors, explorers and sundry other Georgian and Victorian notables, all featuring a little biography so that you could learn as you chose: about Charles Geneviève Louis Auguste André Timothée D’Eon de Beaumont, a French soldier, diplomat and spy who attempted to blackmail the French king, but instead of being executed was offered a pension provided he dressed as a woman for the rest of his life (proving that either the French do have a sense of humour or the monarchy was even more corrupt than the French Revolution’s Reign of Terror would suggest); or about the supremely named Jan Christiaan Smuts, a South African politician and military leader who negotiated a number of significant treaties and later became Prime Minister (as well as instituting apartheid). From there, another wing was comprised of contemporary figures, as well as several photography portrait exhibits. I found the entire gallery to be more than excellent, and well worth going to. While I was ready to bail on the National Gallery without being finished, I ate up every room of the Portrait Gallery and left satisfied. Here’s a picture of Gladstone and Disraeli, two British politicians whose names adorn the streets on either side of our house in Kew.

I emerged once more, this time onto Charing Cross Road. I took a walk along it, discovering a number of nice-looking restaurants and a very funky looking chicken burger shop called Gallus, which I resolved to return to later in the week. From there, I figured I would embark on a little Monopoly board detour, taking in Oxford Street, Tottenham Court Road, Regent Street, and Park Lane before getting back onto Piccadilly for the trot back home, but a poorly-placed roadworks put paid to that idea, so instead I trotted down through the West End, enjoying the atmosphere of fun and theatre in the air on a Friday night. Everything is open late on Fridays, so when I walked past the Royal Academy I could waltz right in and snoop around in the gift shop at 8pm. I also visited Foyle’s, a bookstore that once sold their books by weight, and still has no price stickers on most of the titles on display – here’s a shot of a small portion of the cartoon strip about its history that runs along the side of the shop on Shaftesbury Avenue.

And that is pretty much my day! More to come!